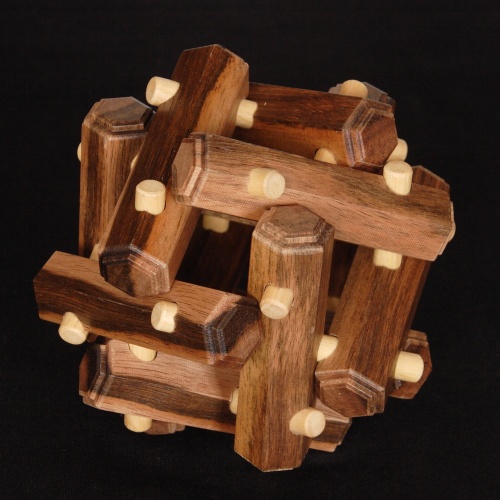 Brian came to this puzzle by accident when thinking about making the Locked Nest, Three Holed Version (22a). In doing so he created a puzzle that he identified some months later on Nick Baxter's auction site called X Rated. The version of the puzzle Brian made was finalised after discussion with Nick who confirmed that Stewart's version had 5 cross pieces but speculated that the legal maximum cross pieces would be 7 but even possibly 8 depending on angles.

Armed with this information Brian revisited the puzzle and managed to get 6 cross pieces. Maybe 7 cross pieces can only be achieved with round stock or maybe he just hasn't found that solution. He might have to get Nick to show him that solution next August.

To our knowledge Stewart has never made this puzzle with hexagonal stock; he's made a few in recent years using round dowel.

Brian has built the puzzle in the reverse direction to Stewart's version, after all we are downunder.