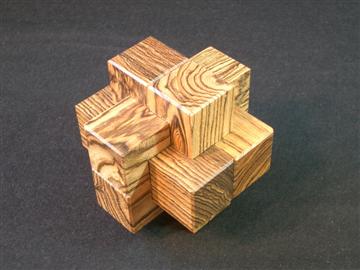 It had been a while since I made a simple six piece burr, and I really like them. They were the first puzzles I made when I was hacking away on my kitchen table nearly ten years ago trying to get a feel for this woodworking thing. So I felt like making another one...problem is, there are so many to choose from. I looked around a bit then remembered the small run of puzzles I had done in 2005 of the Uranus puzzle. Definitely wanted to do it again, it had been so long and in general not many people have made this excellent puzzle (to my knowledge). Thanks to Junichi's gracious permission, I'm happy to be able to offer a second edition! At first glimpse this puzzle looks like another six piece burr iteration. However, disassembly will show that it holds a surprise! One of the pieces has been split, creating a very unique 7 piece burr with quite a tricky solution. Internal voids make this a level 6 burr and also create many unassemblable solutions that will frustrate the solver. In this edition I also pressfitted a pair of fairly strong magnets to keep the split piece together. Hand this to an unsuspecting puzzler and they will spend quite a while trying to disassemble it like a regular six piece burr...to no avail.

Construction is quite nice, smooth but not tight, just a bit of room for when the humidity hits in the summer. Each puzzle is signed and dated; 37 copies made for sale. Ships unassembled. -Eric Fuller (2012)