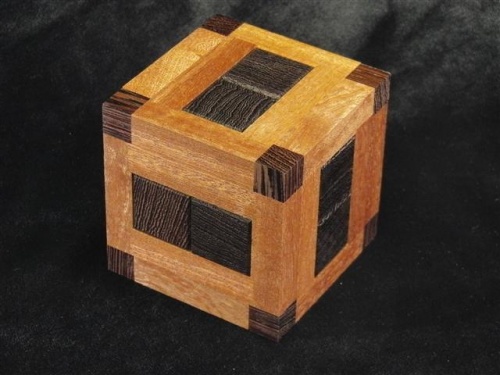 This is the companion puzzle to the much easier "Two Halved Cage 3b". The last one gave an idea of the concept; this one kicks it up several notches! This non-millable six piece burr is surrounded by a cage split into two mirrored halves. Not only must the solver figure out the burr itself, but they must also understand the burr within the constrains of the cage. That alone would be difficult, but figuring out how to start with one half of the cage and put the puzzle in a state which allows the additon of the second half is the real trouble. With a unique level 17.14.9.5 solution, this is a very very difficult puzzle. Lucky for you I took pity and will be delivering them all assembled. That was several hours of fun, lemme tell you!

Construction wise, this puzzle took a while. Each cage is built of rectangles which are reinforced with a .05 shoulder before they are glued into halves. I also added small wenge cubes to the outside corners to create a final cube shape that looks very appealing. The burr pieces themselves are non-millable which means extra work gluing in cubes of the same wood and hand easing them with sandpaper to be perfectly flush. All in all a lot of work on this puzzle, and it shows. Fit is very very nice, not too tight and very smooth.