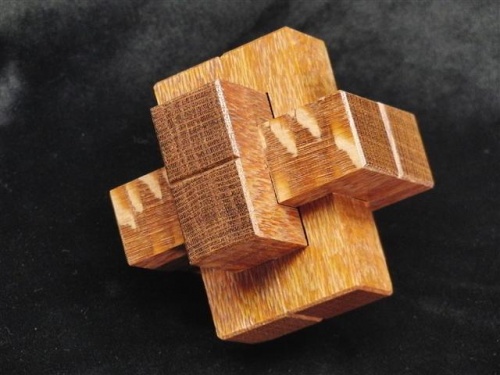 "This puzzle was Jerry Slocum's exchange puzzle at IPP18. I was recently visiting a puzzle friend and saw it on the shelves. Spent some time working with it and finally solved it...HAD to make it. Since John Rausch did such a nice job writing up a description on his site, I think I'll plagarize from it directly:

"Four of the six pieces have diagonal notches on both sides of the large, simple notch. Two pieces have them on only one side. Normally, a six-piece burr consisting only of pieces with a single, large, simple notch could not be assembled. With the diagonal notches described, it becomes a coordinate motion puzzle - a difficult one! Number 129a in Stewart's numbering system. He made 100 in 1998."

I have modified the design a little bit based on Nick Baxter's advice - instead of two pieces having only one notch, one piece does (leaving the other five with double notches). After some experimentation I felt that this configuration was the trickiest, and really made the solver grasp the concept behind the puzzle.

Finaly, this puzzle is by nature very loose when solved. It's just a function of the notch location. I hate loose puzzles, so I included a 7th piece, which is an internal cube with magnets. This doesn't really add to the assembly, but it keeps the puzzle nicely together once solved. Happily it also makes the puzzle much more difficult to disassemble!

30 copies made for sale, each signed and dated." -Eric Fuller