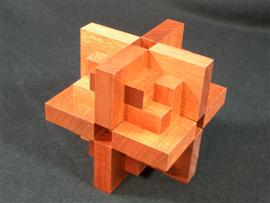 "The story here is that years ago the school that I attended built a gymnasium. A friend of mine who often served on the school board was wandering through after the first floor was put in, and he noticed some pieces left over. He got permission to collect a box of the pieces (maple tongue-and-groove), and his idea was that he could eventually make puzzles out of them and sell them at a school auction. Years later I lived in his basement, and he told me his idea. Later yet I decided to work on the idea, and eventually came up with a design..." -Duane J. Einfeld

"Although it may look familiar, Gymnasium has a tricky interlock and VERY tricky disassembly. I would rate this a difficult puzzle." -Eric Fuller