A diagonal burr is like a traditional burr puzzle with square pieces, except that the pieces are not standing side to side, but edge to edge. 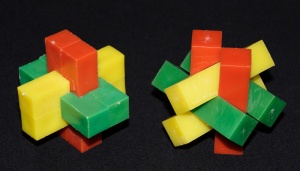 A traditional burr and a diagonal burr 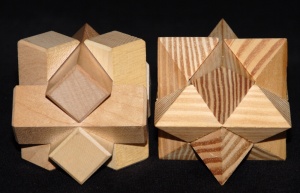 The two most common diagonal burrs

The picture on the right shows two very widespread puzzles, that are both diagonal burrs. It is not obvious at first sight, but their internal structure is similar. It is just the outside of the pieces that is not cut the same way. The one on the left is exactly the same as the one in plastic in the first picture. It has six identical pieces. It is more often found with the shape of a star, as the one on the right side.

When you find this puzzle in shops, however, you can deal with two different designs. One has six identical pieces like the ones in the picture below. The other has three times the same piece, two times a piece with an extra notch, and one plain key piece. And it is not possible to know which puzzle you are buying, as they may look exactly the same from the outside. Both designs exist with the pieces cut flat, and with the pieces cut in star.

While the design with identical pieces has very few larger extensions, the one with a key piece gave birth to many large versions, including some very complex ones, as we are going to see. 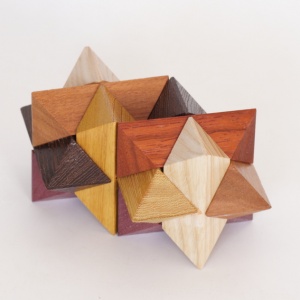 The Diagonal Twins is basically two 6-piece stars joined with a central piece longer than the others, and that is common to both halves. It was designed by Stuart Gee and exchanged at the 2005 IPP by Brian Young. Its mechanism is the same as the single 6-piece star. It must be performed once on both extremities of the puzzle. 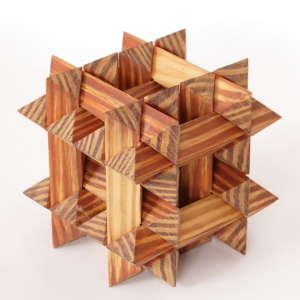 It is also possible to extend the 6 identical pieces of the simple star until they are twice as long. 24 such long pieces, put together, can form a kind of cubic box that is nothing else than 8 copies of the basic 6-piece star connected together. Each copy stands in the corner of a virtual cube, and is linked to three others. This puzzle seems quite rare. The one pictured here is a unique copy made by Maurice Vigouroux.

It is very difficult to assemble, because none of the two solutions of the 6-piece star work here. All pieces are locked and when the puzzle is assembled, it seems that nothing at all can move. In theory, the 24 pieces must all move together and are freed at once in a huge coordinate move. In practice, it is indeed the way it works when the puzzle is disassembled, but the reassembling must be done piece after piece. It needs a bit of reflexion and a fair amount of dexterity.

Diagonal burrs with a key piece 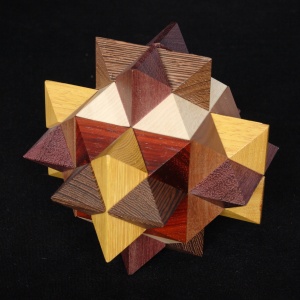 Starting from the 6-piece version that has one plain key, it is possible to design a whole variety of shapes. The pieces are easily assembled until the last one, that has no notch at all and acts as a lock. Several puzzles of this kind are manufactured in Thailand, from the 6-piece basic one to the well-known 24-piece star, or towers that consist in two vertical pieces around which any number of short ones can be piled up. The 24-piece star may be assembled into several different shapes.

All of these puzzles are based on the same idea. Once the mechanism is well understood, they can be solved in the same way. There is no limit to the number of pieces. A distinctive feature of thailandese puzzles is their rounded shape. In the case of the Pillow, shown below, it gives a different shape to each piece, and this can be helpful in order to find where each piece must go. A version with standard pieces would have been more difficult. This feature is well-known on the Barrel puzzle, which makes it easier in its barrel version than in its cubic one. 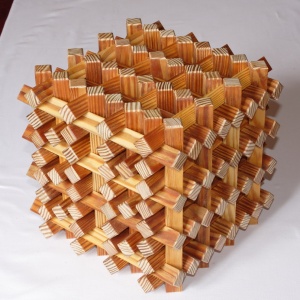 The readers of Stewart Coffin's book 'The Puzzling World of Polyhedral Dissection' are familiar with a monstrous design patented in 1904 by John Pinnel, and presented by Stewart as a curiosity. It consists in a 102-piece cubic diagonal burr. At first sight, it may seem like a giant extension of the diagonal burrs presented above. This is indeed the case, but there is more to say. It is not just a linear piling of pieces locked by a final key. It involves a clever locking mechanism that reminds a bit of pinned tenons and mortices. 6 plain keys play the role of pins, that would hold two tenons represented by 8 piece each, while the 80 remaning pieces would play the role of two mortices. The difficulty is that neither the 'tenon' not the 'mortice' parts are self supporting. The player must thus solve three challenges : to find where each piece must go, to find how they can be insterted in their position, and to prevent the puzzle from collapsing when the first pieces are prepared. 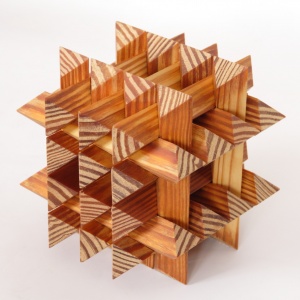 The smallest realisation of this mechanism involves 25 pieces. The version shown on the left is a minor variation with 28 pieces. Note that the pieces of such puzzles can have either the spiky or flat finishing, just like the two basic 6-piece designs.