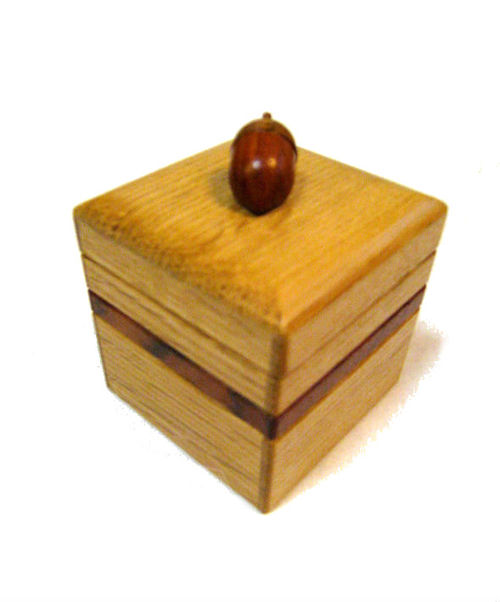 This box opens with only one move. The cover rattles. But, the cover doesn't open even when you pull it up or turn any points of the box. It was unveiled at an exhibition that was held in Feb. 2008 by the craftsman and Mr. Ninomiya. At the exhibition, a customer who experienced Karakuri for the first time opened it very quickly, but a veteran of puzzles needed 30 minutes. This caused a lot of laughter! The acorn is made of wood. This work was designed for the marriage party of the craftsman's friend. RF-20 is a commercial version of it. -Karakuri Creation Group

This is a revised edition of "Acorn Box". In comparison with the initial version (RF-20), the idea is the same. But the way to open the cover is a little different. When people tried to open this work for the first time, the cover fell onto the floor, because, they didn't know the solution. In RF-20-2, the mechanism has changed, and that won't happen. (For the time being, I'll produce RF-20-2 as the standard version.) -Karakuri Creation Group