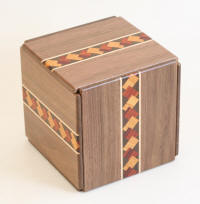 RF-4: "This box is developed by one of CUBI (the binary system box made by Mr. Kamei) It has the trinary system in it. You can open it with 324 moves. But, you need 324 moves to close it again. It's the world record. I think, you need a little patience. It was named by Mr. Steve Barnett."

RF-4-2: "This is a remake version of Super-CUBI. It also has the trinary motion. But, I changed the orders of plates to move. It has a new surface design and now you can't tell apart the 6 plates. It must be easier to lose your way. After an exhibition, I found a calling card inside. He appealed "I opened it !" Then this time, I put into a small card inside. What color is the word ? (Well, there isn't a prize !)."

RF-4-3: "This is a remade version of Super-CUBI. It has 324 moves. The motion is the same as the RF-4-2. The word, "congratulation" was written on a small paper and put inside the box. What color is it this time?"

RF-4-4: "It is a remake version of “Super-CUBI”. A regular customer cried, “I’m tired when I move 300 times!” The craftsman understood that. Therefore, this time, the new copies were adjusted a little loosely. Well, have you ever heard “Speed Cubing” of “Rubik’s CUBE”? It is a speed competition. Top players seem to solve it in about 10 second. It is a unbelievable speed. By the way, the craftsman sometimes tries “Speed Cubing” of “Super-CUBI”. Now, the looser adjustment is suitable. Until now, Feb. 2009, his best record is 43 seconds. But, the Contestant population is maybe only one. Everyone, please try!"