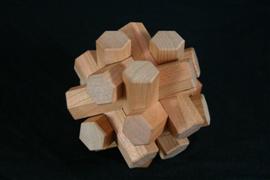 "Mr. Coffin called this the optimal design of the various Hexsticks varieties. It has a single solution which is serially interlocking and even contains a tricky non-linear move. Moderate to difficult to solve, and a lot of fun. While it shares the same appearance with the original Hexsticks, it is a much more difficult and entertaining puzzle to solve - the difference is that of a standard six piece burr and a level 5 burr (same appearance but very different experience). I constructed these with the full compliment of notches, which leaves voids in the puzzle and makes assembly even more confusing. Each puzzle is hand waxed, and they were made a bit undersize since it has been dry in the shop lately. The only thing I am not happy about is some burning on some of the angled cuts, which is not visible once the puzzle is assembled." -Eric Fuller
"Stewart said himself that this design would be the one optimum design in his row of the different hexsticks-designs. He made only one in 2003 and said: "the puzzleworld awaits some enterprising woodworker to manufacture and sell this neat design": in 2044 we found this woodworker in the person of Josef Pelikan for Coffin nr. 159 A; in 2011 Steart Coffin sent me his own single model and asked for a small production of this real unconventional design of the Hexsticks series." - Puzzlewood