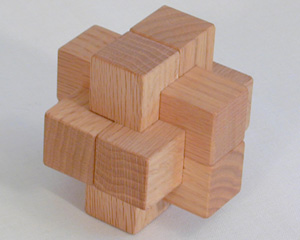 "Bill's Baffling Burr requires 5 moves to remove the first piece. There are 24 ways in which one could imagine the pieces being assembled, but only one of them can be physically carried out. A computer program was written to quickly analyze all ways a set of 6 pieces could be assembled and how many moves were required. This program was used as part of the design process.

Bill's Baffling Burr appeared in the Computer Recreations column of Scientific American in October, 1985. Unfortunately, one of the pieces was shown incorrectly in the article, and the resulting burr was impossible. Among letters received from many readers was a model constucted in aluminum (see image below), which requires an Allen wrench to disassemble!" -Bill Cutler