The 6-piece burr is a common puzzle made of 6 pieces that interlock into the shape of a cross. Many different models exist, some very easy, some very difficult. The basic design involves squared pieces featuring cubic notches in the middle that allow them to interlock with their neighbours. This simple concept leads to a surprising variety of designs. Let's have a look at some of them. 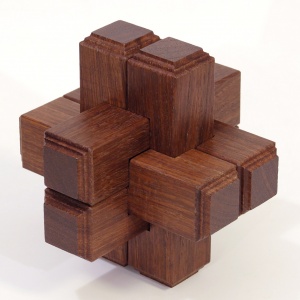 The Mega Six, by MrPuzzle 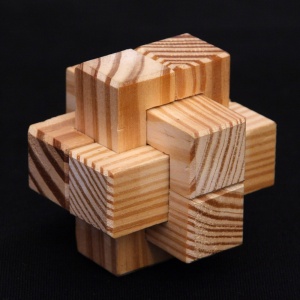 The 6 pieces of the Baby Chuck

The Baby Chuck is not a very interesting puzzle in itself. It is sold as part of the Woodchuck collection rather than as a standalone puzzle. But with its simple pieces, it allows to get a very clear view of the internal structure of a 6-piece burr. 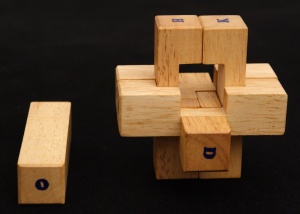 The most common 6-piece burrs are solid. The 6 pieces may be different, and have their notches configured in a way that allows to fill all the empty space inside the puzzle. The one pictured on the right is a very old design that has been copied so many times that it is nicknamed "the well-known one". It was found in the XIXth century in chinese puzzle sets in ivory. One of the 6 pieces has no notch at all. It is the only one that can move when the puzzle is assembled. This puzzle can be more difficult than it seems at first sight. Many different possibilities may be tried in order to assemble the 6 pieces, but only one works. 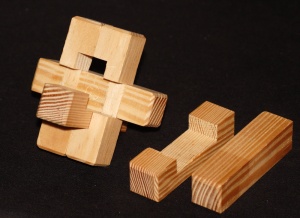 The Double Cross is another example of solid 6-piece burr. Very easy.

Question : we have seen that these two puzzles have a key piece that fills all the space left inside the puzzle. When a 6-piece burr has no internal space, does it mean that it must feature a plain key piece ? The answer is no...