Usually, articles about puzzle parties are posted on blogs. But I don't have an english language blog. And anyway, I prefer the exchanges that are possible on a forum.

Yesterday, I was helping Jean-Baptiste to organize the third puzzle party held in Lyon, France, at the "Triche", an association of gamers where animations based on various themes are common. Jean-Baptiste and I are both puzzle collectors, and we had planned to present some of the best puzzles in our collections, and to invite designers, manufacturers and friends to join us for an afternoom of puzzling in Lyon.

We went at the Triche at 11 am, well before the opening, planned at 3 pm, in order to setup the tables and puzzles.

We were quickly joined by Christian Blanvillain, designer of the Quadratum Cubicum puzzle, then Philippe Cichon, who leads an association of "friends of the wood" and makes puzzles as a hobby. Maurice Vigouroux and Stéphane Chomine came next and brought us some of their new productions.

Three tables were dedicated to beautiful puzzles. Click on the pictures to view them in higher resolution.

On the left side, the Jupiter and Scorpius, made by Maurice Vigouroux, stand around George Hart's Frabjous Special, made by Artifacture. Then comes an X-rated (Brian Young / Stewart Coffin, made by Brian Young) and an Arjeu puzzle made of 30 notched square sticks, probably based on a Philippe Dubois or Bill Cutler design. A Glingle Ball (Samson products) is visible in front of the X-Rated.
I had planned to talk about their geometric relationship. The Jupiter, the Frabjous, the Glingle Ball and the one from Arjeu are all based on the enclosure of the rhombic triacontahedron with 30 identical sticks, while the X-Rated and Scorpius are based on the enclosure of the rhombic dodecahedron with 12 identical sticks. These enclosures and their variations using notched or pinned sticks are descibed in Stewart Coffin's book about Polyhedral Dissections.
We can also see a small rattleback (Pif Gadjet), the two XmatriX labirynths (Jeremy Goode), and All Hail the King (Gillen). 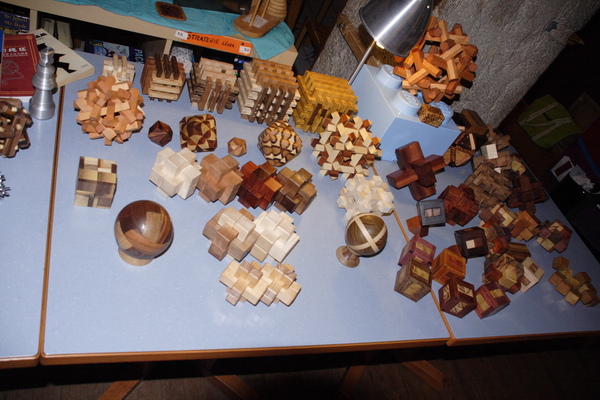 Next table, from back to front, a series of board burrs designed by Donald Osselaer and made by Maurice Vigouroux : Natrium, Xenon, Fermium 1, Ultraburr, and Millenium. These burrs are designed to require the highest possible number of moves to be disassembled (the Millenium needs a total of 717 moves), while remaining relatively easy to understand.
In front of them, next to the Arjeu, some Vinco puzzles : a rhombic dodecahedron, an Ocvalhedron, an icosahedron, another Ocvalhedron, and an 8-knot cage.
Next rows on the left : Handed Halfcubes, by Vinco, and a sphere from jean-Baptiste's collection, coming from Bernhard Schweitzer shop. On the right, a kind of 24-pieces cage that Maurice and I have modified in order to make it more stable, while still using 24 identical pieces, and another similar sphere.
In the center, a collection of non-commecial 6-piece burrs made by Maurice Vigouroux. From left to right and top to bottom, Computer's choice 5-holes (Cutler), Bill's Ball Bearing Burr (Cutler), Burr B (Marineau), Abad's level 9 (Abad), Love's number 1 (Love), Burr 23 (Brown), and two very old simple designs.

On the far right, among other puzzles, a Triple Croix in Bubinga (Pierlot), and some Châteaux d'If can be seen.
The left one on a stand is a unique model made in ebony and marblewood for Stéphane Chomine, the designer.

After eating a very good tabbouleh made by Jean-Baptiste, Stéphane Chomine showed some LOL and HyperLOL puzzles that he designed and made for us.
Here, Christian Blanvillain plays with an improved LOL after Stéphane has explained how to disassemble and reassemble it.
Disassembling it is not difficult, but reassembling it is another thing. 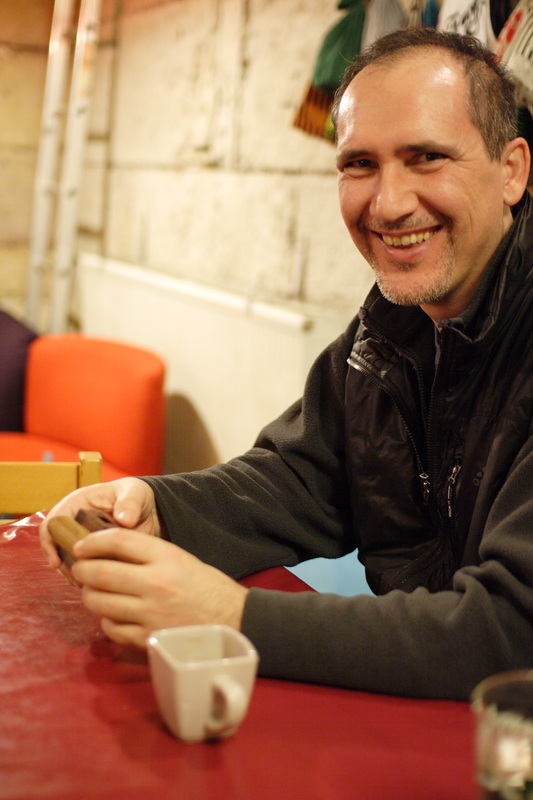 After the opening of the Triche, Christian Blanvillain's table is quickly successful. His puzzle, Quadratum Cubicum, consists in dissections of the square.
9 dissections are proposed. For each of them, the goal is to arrange the acrylic pieces into three little squares. This part is the easiest. Then we must arrange the same pieces into a big square.

Here, Christian presents the history of the dissection of the square into three smaller squares, using the least possible pieces, that began with Abu'l-Wafa' in the Xth century, with a solution using 9 pieces.
Each of his puzzles bears the name of the mathematician who found the dissection. 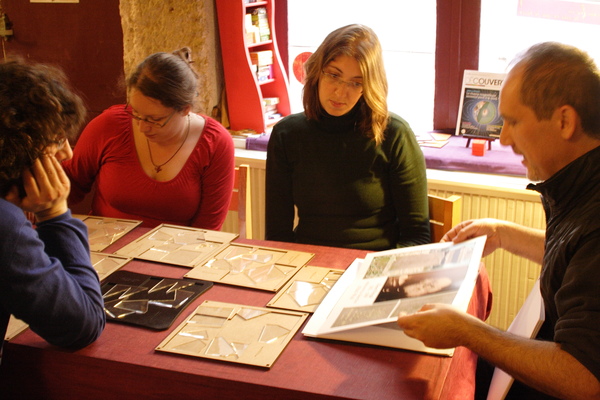 From left to right, Stéphane Chomine, Philippe Cichon and Maurice Vigouroux are discussing about puzzle conception, and how to cut sticks that are perfectly square. 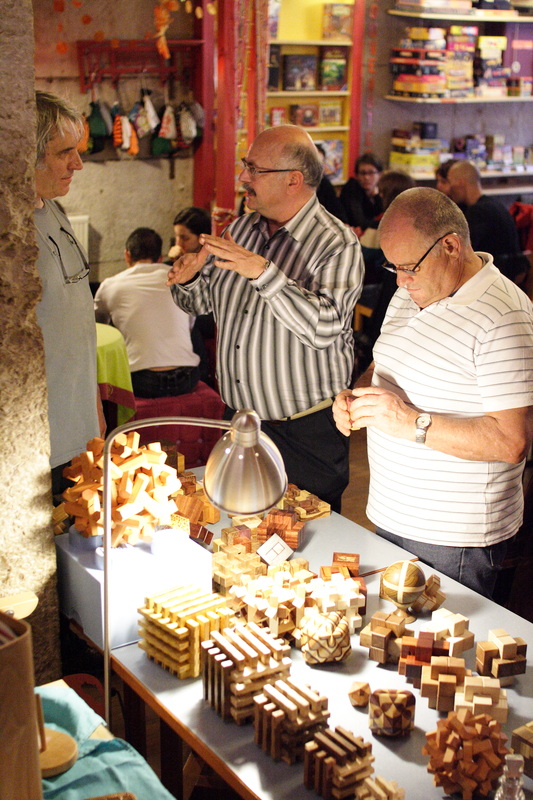 Meanwhile, a mix of visitors and hardcore gamers discover a selection of puzzles scattered on the other tables. On the left, the Happy Cubes provide a suited challenge for such an event. On the other hand, the XmatriX are a bit too hard for beginners. 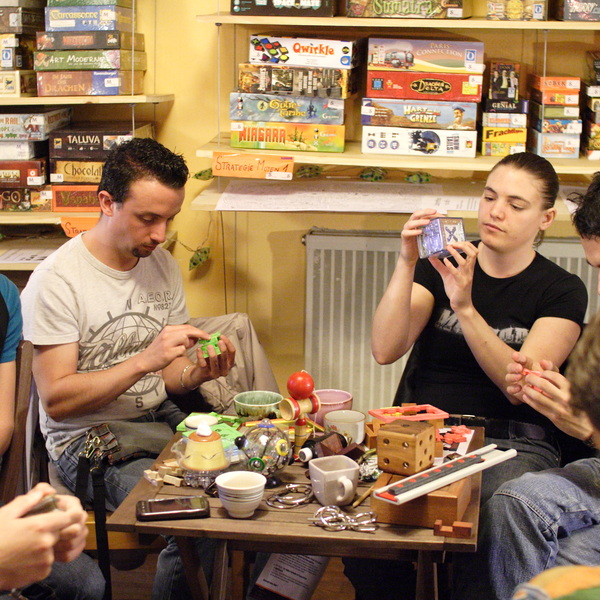 Time for a puzzle contest ! We prepared some puzzles that people could play with at the same time. Maurice had cut five Tangram games for the contest, and I prepared some figures for the players to guess.
The two easy ones are worth one point, the two average ones two points, and the two hard ones three points for the first player to solve them. At the end, the player with most points wins a puzzle. 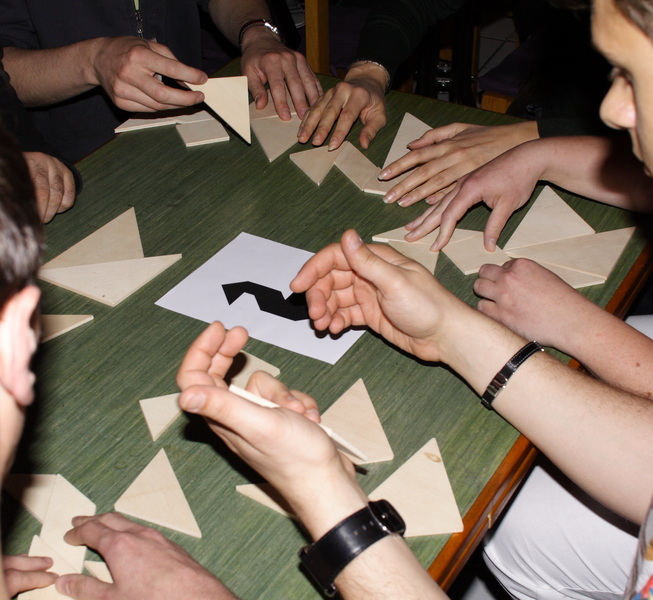 As soon as the average pictures are proposed, it becomes clear that a time limit is required, because nobody seems to solve them in a sensible amount of time. 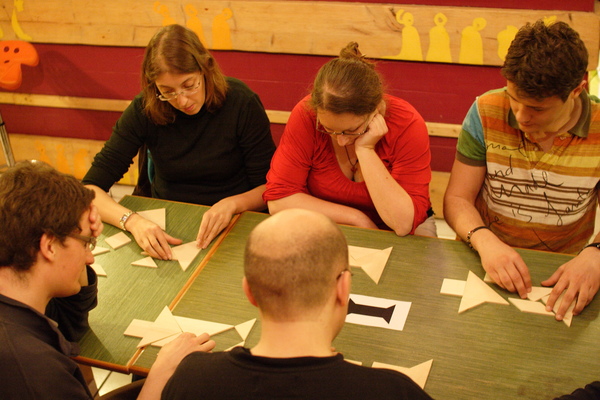 We eventually fix the time limit to 10 minutes, and to propose only one of the two hard pictures. Fortunately, Mary is successful. She wins a puzzle of her choice among a Hanayama Ring II, a small Dalloz 24-piece cage, and a Vinco Tritresor. She elects the last one, because she likes secret boxes.

But time runs too short. The puzzle part of the day at the Triche ends at 7 pm. I have just the time to explain the logic in Donald Osselaer's puzzles, and the mystery behind the 1-2-1-3-1-2-1-4-1 sequence that he says to be the base for his puzzles.
I use the Millenium for this purpose, showing how the iteration of locks make the number of moves grow exponentially, and I show how, surprisingly, the same kind of binary structure can be seen in the solution of the Tiros, a 18-piece burr by Alfons Eyckmans, where the repetition of a micro-sequence makes a mini-sequence, that, in turn, repeat itself into a longer sequence of moves.

We then leave the Triche to finish the day around a typical meal with Jean-Baptiste, Maurice, Philippe, Stéphane and Jean-Paul.

That was a very nice day, and I'd like to thank very much the people who organized and took part : Jean-Baptiste, member of the association, who is at the origin of the project, Maurice, who manufactured the Tangrams especially for the contest, and brought a lot of puzzles, Stéphane, who also made and brought puzzles for us, Christian, who came from Switzerland and animated the Quadratum Cubicum table, Philippe, who came especially from Paris, the people at the Triche, who took care of the logistics, and everyone who took part.