Hi !
The fifth annual french puzzle meeting was held on 3rd May at Lyon. It was a real pleasure to see old friends as well as new faces.
Jean-Baptise Jacquin, who is a voluntary of the association "Moi-j-m-en-Fous-je-Triche" proposed us to join him at 10 in the morning so that we could help him to arrange the meeting if we would like to. This early get together in the morning also enabled us to spend more time together than the previous years.

As usual, I came up with loads of puzzles. I brought some wire puzzles which are suitable for the visitors, like the horseshoes, and some for confirmed puzzlers, including Vinco's Kiss, Bi-Cycle and Icosahedron 92. I had some interesting new acquisitions with me, like Jean-Claude Constantin's Uhrwerk and Steuerrad, and Steve Nicholls' Pentapod, by James Dalgety. I also brought a gyroscope and a Powerball.
Last year, I wanted to do a presentation of non-cubic puzzles but in vain, so I brought them this year. The collections include Jupiter, Scorpius, Tetraxis, X-Rated, Hexticks Revisited, Pentapod and some others that share the same geometry. I prefered not to bring again my copy of George Hart's Frabjous Special, as it is developing some cracks on interlocks in many places.
Jean-Baptiste in his part brought many puzzles too. We loaded several tables with them. 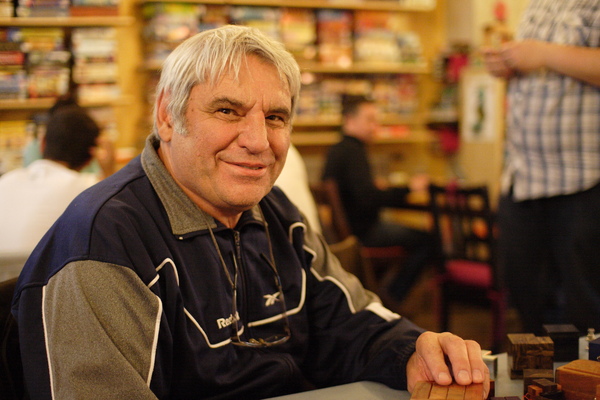 Stéphane Chomine had brought some copies of Double Cible and NOLO that he made himself. I disassembled both. NOLO seemed to be the most difficult, and it features a lot of rotations. This is a welcome feature often seen in Osanori Yamamoto's designs, but used here in more complex puzzles. 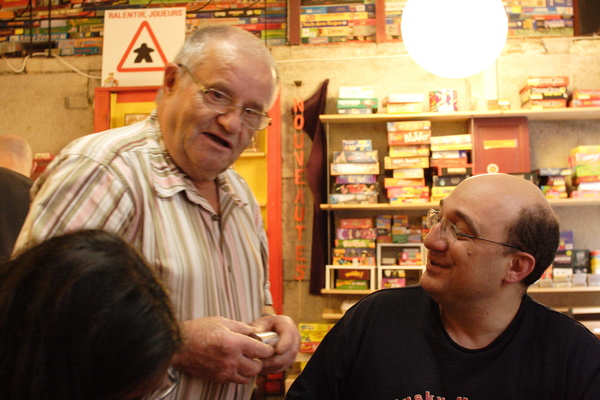 Maurice Vigouroux (on the left) amazed us with a new record in miniature puzzles : he made again his 18-piece level 1 burr, but this time, the pieces are only 2x2 mm. The whole puzzle is 8x8x8 mm and is barely the size of a nail ! The material wood was too fragile for this realisation, therefore this version is made of brass. He designed and built a new dedicated set of tools for this project : he adapted a saw blade on a router with the speed controlled by foot, and built a mobile cradle to handle the brass pieces. 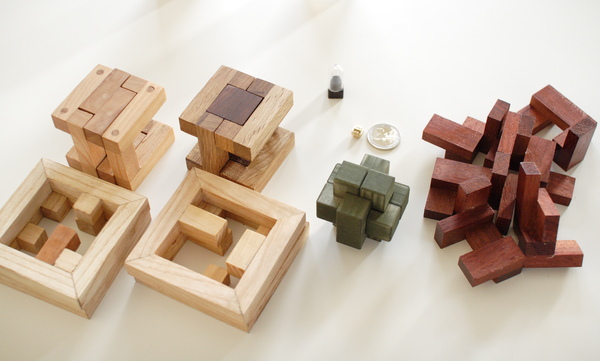 Nolo, Double Cible, 18-piece miniature, a prototype from Gregory, and the Domino Cube.

Maurice's puzzle looks like a piece of dust, near the 2 euros coin in the picture. Meanwhile, Allan Boardman told me that his smallest puzzle was a 3-piece burr with pieces that are 1x1 mm, in boxwood. So, technically, Maurice's puzzle is not the smallest in the world. It is nonetheless, so incredibly small that we are not sure if it is possible to assemble it with our bare hands. Maurice used some strings to hold the pieces together. That's one of the challenges on my list ! 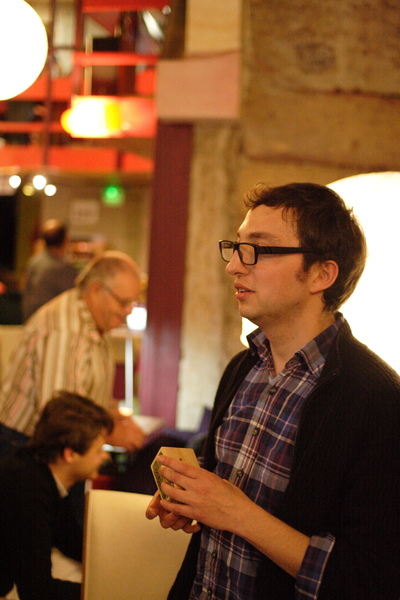 Jean-Baptiste brought a copy of Van Deventer's Domino Cube that he made himself : it is an unusual dissection of a cube featuring 6 pieces, all made with 4 domino-like pieces glued together. 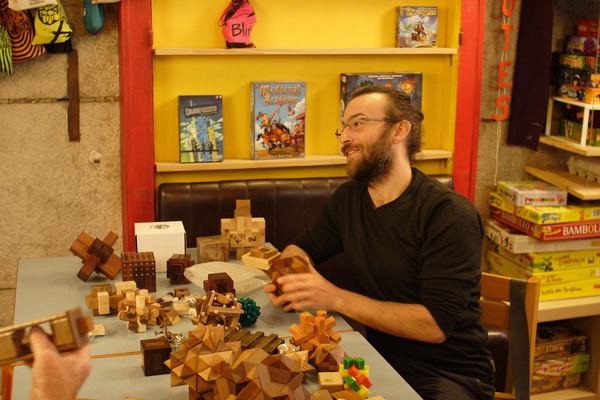 Gregory Benedetti and his wife were with us. Gregory showed some of the projects that he is working on. What looks like a 3-D printed 6-piece burr in the picture above is one of them. I can't reveal anything except that I find the idea extremely interesting, but some difficulties in the manufacturing process are yet to be overcome. 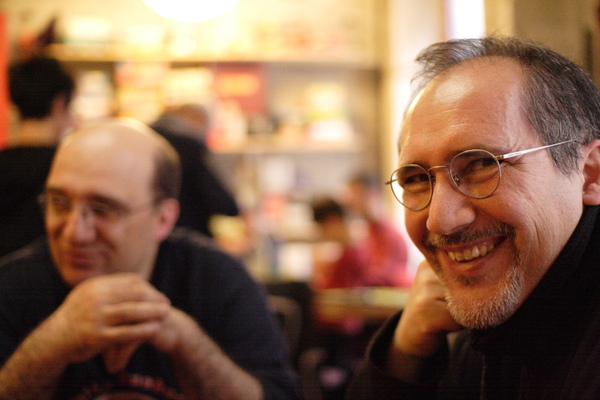 Christian Blanvillain came with his usual set of puzzles including all the Quadratum Cubicum series, that are 2-D put-together puzzles where the goal is to transform three identical squares into a single big one, and his dissection of the cube into a set of identical pentahedrons, made in 3-D printing, that is also an excellent puzzle. According to him, these pentahedrons, if we can get enough of them, can be used to build any of the 5 polyhedron that can fill space by translation (that are the cube, the hexagonal prism, the truncated octahedron, the rhombic dodecahedron and the elongated rhombic dodecahedron).

Some friends joined us : Philippe, Latha, Jean-Paul and Mark were there early. We had lunch together before the association opens to the public. Every one brought to eat where some delicious dishes were homemade and some others were readymade. 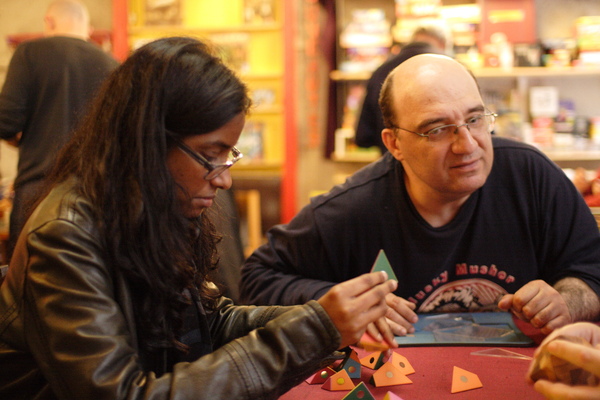 Christian's puzzles were a success to Latha and Jean-Paul. They look more comfortable than interlocking puzzles, but Christian handed me a prototype of another dissection of the square, into two smaller squares of different sizes, this time. Although I found rather quickly how to make two squares with the pieces, it was very hard to make the big square. This was definitely more challenging than any of the Quadratum Cubicum dissections. 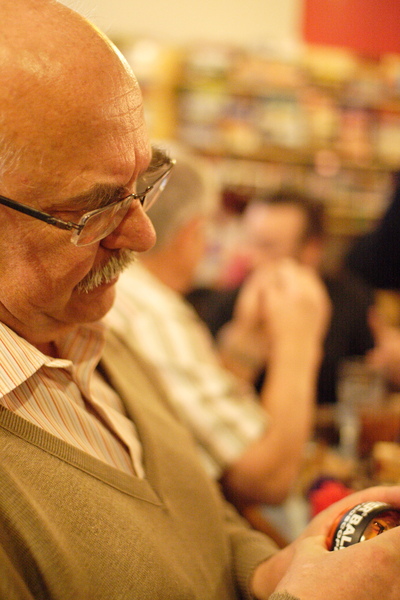 Philippe is interested in sciences and maths. He demonstrated the working of the gyroscope that I brought. Its ability to resist to any rotation looks uncanny, as it stands on a thread, or on the tip of a finger in any position.
In turn, I followed with the Powerball, that is a gyroscope built inside a mechanism that forces it to rotate while it spins, which generates a constant torque on its shell : the Powerball seems to try to escape the grip of its holder by itself. After a short training, it is possible to maintain and even accelerate the spinning of the Powerball with a movement of the hand. This is not a puzzle, but it was successful nonetheless.

I eventually found some time to explain some various approaches to non-cubic puzzles. Using the explanations given by Stwart Coffin in his book, I explained how the Scorpius and Jupiter puzzles were designed as enclosures of a rhombic dodecahedron and rhombic triacontahedron respectively, and showed their many variations : Locked Nest, Hexsticks...until the Pentapod. 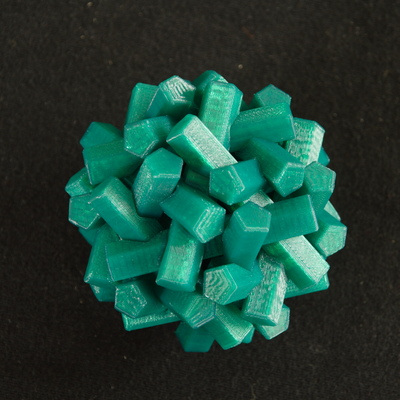 Stewart's explanations run until he describes the 30 interlocking pentagonal sticks. Steve Nicholls' Pentapod is the same, except that all sticks are rotated so that all notches hold captive the next piece, forcing the puzzlist to slide all pieces into the notches.
I then used the explanations that were given to me by Jane Kosticks about the possible repartitions of 30 sticks in space, and how, starting from the 30 edges of an icosahedron, it is possible to successively generate a 10-triangle polylink, a 6-axis star (or Jupiter puzzle), five interlocking tetrahedrons (a puzzle made in origami by Allard), a 6-pentagon polylink, a 10-axis star, and eventually the 30 edges of a regular dodecahedron.
I last showed the method of George Hart : starting from a polyhedron, he uses a software to extend its sides into any stellation. Then he shapes parts of the extended sides in a way until the software confirms that they don't interlock anymore. This method can only generate puzzles with flat pieces, but it allows to design puzzles inaccessible to the two previous methods, like for example this incredible 20-piece Snarl, that is a stellation of an icosahedron.

Near the end of the afternoom, I noticed that Jean-Baptiste had brought his Congestion puzzle, a 6-piece caged burr with a 59 level, that is terribly difficult. Since I know the solution of this puzzle, I maliciously disassembled it while he was not noticing and left the pieces on the table just before we had to pack everything and go to the restaurant for dinner. When he realized it, he said that I would not get home until his puzzle was assembled again ! I said that if he didn't want it to be played with, he didn't have to bring it !
Of course, I reassembled it during the dinner.

It was a very enjoyable puzzle meeting, and I really want to thank Jean-Baptiste for organizing this every year, as well as every one who took part and came to join us !

Oh, I forgot to talk about the strange large 6-piece burr standing on the right side of Gregory. It is a puzzle made by Philippe Cichon. Its external look is the same as a traditional 6-piece cross, but it was designed in the most complicated possible way, so that it is practically impossible to open without knowing the solution.

It features no less than two magnet locks and two Yoshigahara's crosses hidden inside, so that various banging and spinning actions are necessary and must be performed following the exact sequence and orientations, otherwise, everything resets to the locked state !

Thanks for the write-up (and pictures) of your puzzle meetup. It seems you had quite a range of puzzles there!
I'm impressed with Maurice's 18-piece mini-burr! The notches must be tiny - I'd love to see a close up of the pieces

Hi Chris,
Here are the pictures taken by Maurice. I have not disassembled my copy yet

As you can see, the whole puzzle is smaller than a 1 eurocent coin.
And he even managed to bevel the pieces ! 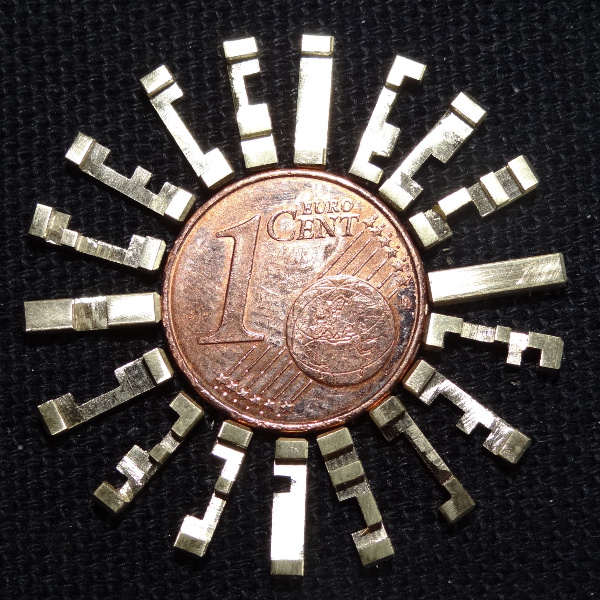 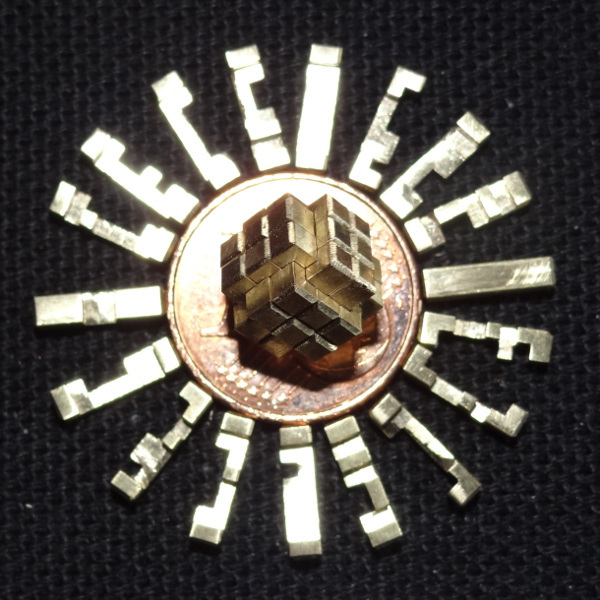 Thanks for the great writeup.

That burr is just insane. While I'm not normally a burr puzzler, I completely appreciate the complexity and skill required to make such an object. Now that's one Burr I'd love to add yo my collection!
--
http://puzzling-parts.thejuggler.net/
Top

TheJuggler wrote:...Now that's one Burr I'd love to add yo my collection!

Hello,
Christian asks me to correct a little mistake in my explanations. The pieces of his cubic dissection puzzle can't be used to build the 5 platonician polyhedrons, as I said, but the 5 polyhedron that can fill space by translation, that are the cube, the hexagonal prism, the truncated octahedron, the rhombic dodecahedron and the elongated rhombic dodecahedron.

Sorry for the confusion. It should have been obvious, isn't it ?

More info can be found on p.13 of this publication.

Thanks for the write up. Looks like it was an great puzzle party!

I'm glad that the Pentapod was of interest. I had a lot of fun designing and building it. If anyone does feel like taking on the challenge of building one in wood or metal do get in touch!

Thanks Guillaume for this review.

It was a great day. A lot of friends, a lots of visitors and a lot of puzzles !
I think every body had enjoy this day.

Thanks for the pictures. I had no time myself to make some.

I hope more people will join us next year.