The Jupiter is one of the most recent "classic" puzzles. Published in 1971 by Stewart Coffin, most puzzlers have seen one at least in picture. 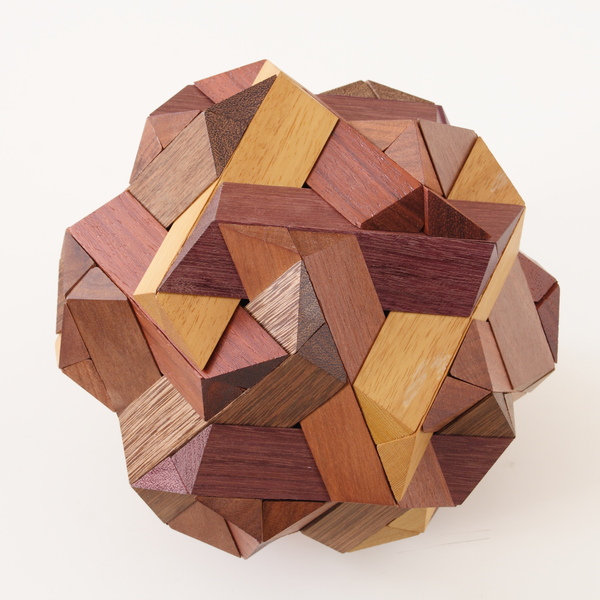 However, young puzzlist might have some difficulties to find one. Stewart's ones have been out of stock for a long time, and very few manufacturers have taken the challenge to cut all the odd angles with the required precision.

While puzzle designers try to make puzzles that look simple, but are complicated, the Jupiter is a perfect example of the opposite. The disassembly is not difficult at all. And the assembly is exactly the same thing, but in the other direction.
It is made of 12 identical pieces, themselves made of 5 sticks glued together. 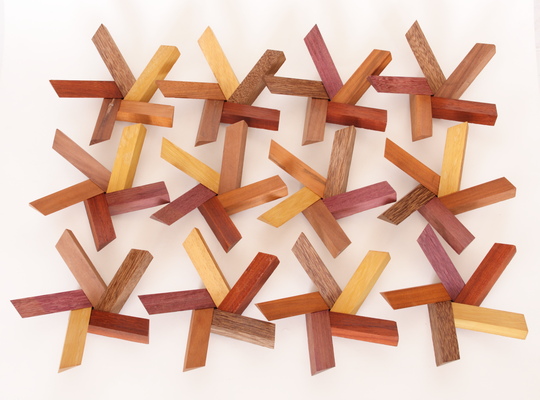 The Jupiter has fascinating geometrical properties. According to Stewart Coffin, its shape represent one of the three only ways to completely enclose a hollow space with identical straight sticks that may be extended at will on the outside. The inside is a rhombic triacontahedron, that is, a polyhedron with 30 sides.

The second way is the enclosure of a rhombic dodecahedron (12 sides) with triangular sticks. The equivalent realisation with glued sticks is the Scorpius puzzle : 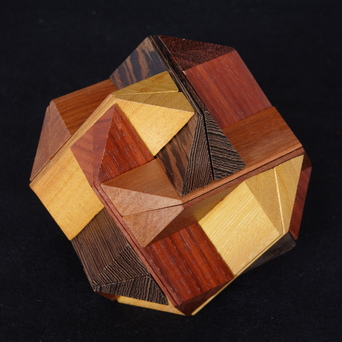 The third one is a cube enclosed with six square sticks.

I found it very surprising that such a simple property was met by a complicated polyhedron like the rhombic triacontahedron.
I managed to reconstruct some part of the demonstration. I am now convinced that a hollow space completely enclosed by identical sticks must necessarily be a rhombic polyhedron (the cube is nothing else than a square rhombic hexahedron !). I have not yet found the proof that the cube (or hexahedron), the dodecahedron and the triacontahedron are the only ones (if another kind of rhombic polyhedron ever exists).

The original Jupiter design use six different colours that match six directions of space. There are ten sticks of each colour. For any set of 6 colours, there are 12 possible repartitions on the puzzle. If the 12 pieces of the puzzle are glued, the designer has to choose one of these 12 possibilities, and once the pieces are made, there is only one way to assemble them such that one colour matches one direction of space.

But some manufacturers (Maurice Vigouroux, Dalloz...), instead of gluing the pieces, use dowels to hold the 5 sticks together, which allows to completely disassemble the 60 sticks. 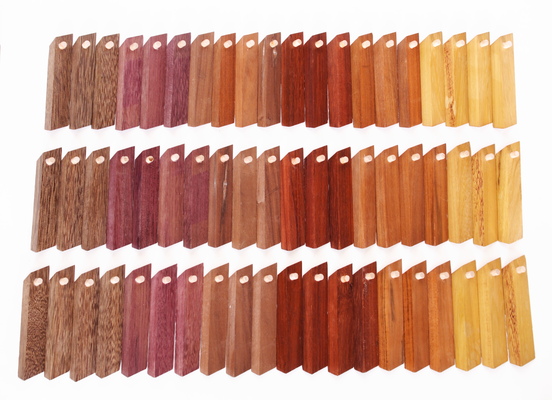 There are 144 possible ways of putting together 5 colours out of 6 in a cyclic arrangement, which is 12x12. Therefore once you take five sticks in order to build your first piece, it determinates the final colour arrangement on all the puzzle, and you have no choice left for your 11 other pieces if you want to be able to align your colours properly.
Another property of this colour arrangement is that for each of the 12 pieces, its symmetric twin, with the same colours in the reverse order, is also present in the puzzle, and is located at the opposite.

This enclosure of a rhombic triacontahedron with 30 sticks (60 half-sticks in the Jupiter design) has been an extremely prolific concept for geometric puzzles. In fact, virtually any puzzle made of 30 identical pieces is a variation around the Jupiter design. The Frabjous is a good example. Its pieces are flat, and the inner space is exactly the same rhombic triacontahedron as the one inside the Jupiter, except that it is not completely closed.
The Poseidon looks different, but its 30 rods are placed exactly like the 30 pairs of the Jupiter.
Even the Glingle Ball shares the same structure.

In the last case, the shape of the enclosed polyhedron is lost, but there is a property that is always present, and that is the key to solve any 30-piece puzzle in this big family : all pieces meet themselves in 20 vortexes of 3 pieces, and 12 vortexes of 5 pieces.
The vortexes of 5 pieces are especially useful in order not to make any mistake when a piece is inserted and you must choose which opening it should come through on the other side.

Yet another fascinating property it that since the 30 pairs of pieces have a top angle of 108°, they can be turned into perfect pentagonal sticks. The result is this :
http://johnrausch.com/PuzzleWorld/toc.a ... sticks.htm

What's amazing is that the sides of every stick rest perfectly flat on all the neighbourous sticks !
This design can be found with hexagonal, or square notched sticks, that are then randomly rotated, but the proper version, with perfectly aligned pentagonal sticks, seems to be extremely rare.

The Scorpius, on the other hand, gave birth to many similar variations, that use hexagonal sticks. Example, the Siamese Locked Nests.

The french manufacturer Dalloz recently made some quite large Jupiter puzzles : 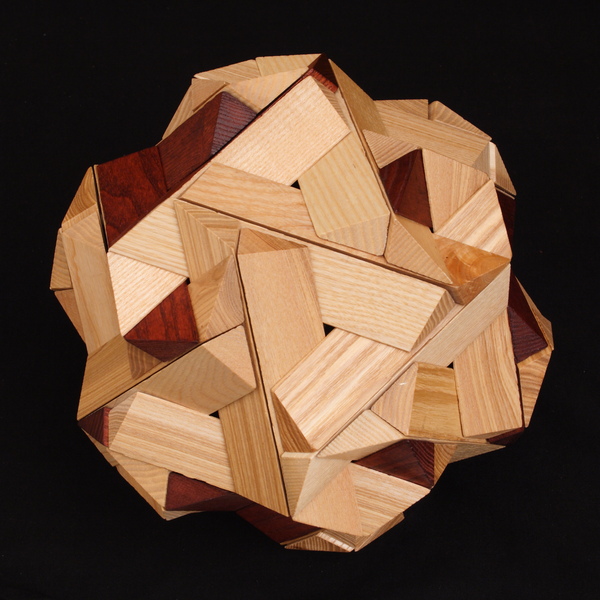 They don't seem to be available on the web. I got one in the Christmas market of my town. The diameter is 22 or 23 cm, according to the side on which it stands. It seems to be made of pine, or maybe ash. It can be completely disassembled.

Dalloz usually makes his puzzles in white wood, with some red pieces in addition, without any logic.
Here it seems that they just included one red stick per piece, which makes 12 red pieces for the whole puzzle.

At first sight, this doesn't allow a proper construction, since there are only 10 sticks in each direction. But the result is in fact very interesting, as it reveals other goemetric properties of this puzzle !

I found that there are 5 different ways of positionning these 12 red pieces in the puzzle such as their positions are all equivalent. The picture above shows one of them. They form 4 groups of 3, which shows that the Jupiter shares the same symmetries as the tetrahedron, since these 4 groups must be at the 4 corners of a regular tetrahedron.
This is obvious for 4 of the 5 symmetrical repartitions. In the 5th one, the 12 red pieces form 6 pairs, and each pair is orientated in one of the 6 possible different direction.

Another surprising property is that if you build a first group of 3 red pieces, the position of the 3 others groups is yet undecided. You have the choice between 2 configurations that are in fact 2 tetrahedrons sharing a common corner. And the pattern made by the red pieces is different in the two cases !

I then realized that, though the axis of symmetry of the mechanical and colour patterns are offsetted, the two halves of the puzzle are absolutely identical ! I was quite surprised, as the two halves of the original 6-colours design, that seems to be more symmetric, are merely the opposite of each other (if one has the colours turning clockwise, the other has the colours turning counter-clockwise).
It is hard for me to imagine that I am cutting a tetrahedron in two, and that I'm getting two identical halves ! But in the Jupiter, this is always true, and you can have fun trying to find why, playing with your puzzle.

I don't think that Dalloz had all this in mind when he (or they) included a red piece every 4 white pieces. But this made me rediscover this puzzle. The large size allows an accurate orientation of the pieces during the construction, and the texture of the wood outlines the geometry of the puzzle.
I am now trying to find colour schemes with two kinds of equivalent positions for the red pieces. I have just found a nice one.

If you get or make a Jupiter puzzle for yourself, try to make it completely disassemblable, and use at least one of these two colour designs. Its makes the puzzle a lot more interesting. For example, I think that it should be possible to assemble the original 6-colours design so that no pieces of the same colour are in contact with each other.
I don't know if it is possible to extend this property to pieces that are only virtually in contact (by the edges or the corners).
Top
Post Reply
1 post • Page 1 of 1