This week-end, I had the pleasure to see Maurice, who was in my town.

Of course, he had brought his latest productions with him, and I ended with two new puzzles in my hands : Free-the-Monkeys, and Congestion.

The regular readers of the wiki already know Free-the-Monkeys, a 18-piece burr created by Alfons Eyckmans, that is more than a 18-piece burr : two extra pieces are hidden completely inside the puzzle.

It is not the first time that this kind of variation around a 18-piece burr is used. For example, the Lange Wapper Casino, created at the same time, features four dices hidden inside. And the Gold Mine, still by Alfons, has some complete 8-unit burr pieces included inside a 10-unit puzzle.

But Free-the-Monkeys stands out with its little figures. The extra pieces have two legs, two arms, and a face ! They represent two "monkeys" who are prisoners inside the puzzle. The game consists in unlocking their cage.
The number of moves are 10.3.14.7.

The puzzle is made with Kotibe, a brown wood that shows golden highlights when lit properly, and difou, a yellow wood. The monkeys seem to be in ash. It has the standard size of 8x8x8 cm. The colours get together well.

The one that I've got came straight from the workshop without having been adjusted. There is a clear difference with completely finished puzzles : the pieces are cut so close that some moves require the use of thumbs, because the pieces don't slide easily.
With puzzles made for sale, this behaviour is corrected one by one, piece by piece, as the are assembled : when a move doesn't come easily enough, the puzzle is disassembled, and the piece is adjusted. It explains the high price of a puzzle like Tiros. With more than 150 moves, the process of checking and finishing takes time ! Alfons works the same way.
In an old discussion about 18-piece burrs in the Twisty Puzzle forum, people were saying that however accurate we are in the cutting process, the tightness of a finished puzzle is unpredictable because it depends on the way the pieces hold each other inside the puzzle.

I got the puzzle fully assembled, and managed to free the monkeys after, say, one hour. It is easier than the Phelan, or the Cannich, I'd say. It seems to be on par with the 18-in-Block.
The design works very well, the monkeys are really trapped inside until the very end. At the beginning, it is even unclear that there is actually anything hidden inside the puzzle !

Here after 5 pieces are removed, all we can see is the head of a monkey.

It is impossible to reassemble it unless you keep track of the position of each piece. I used Burrtools and created a file for the puzzle. The computer, a 3 GHz Intel one, took 6 minutes to find the solution, and then 6 more to tell that it was the only one ! Even with the colour restriction and the two monkeys inside, it has 89553 assemblies !


The other puzzle of the week-end is going to be wicked ! The name is Congestion. It was created by Goh Pit Khiam, and I heard that Jack Krijnen took part in its conception (not certain about it, Jack, if you are around...).

I am currently in the process of reassembling my copy, and I am in for hours...
More about it when it is actually solved and I can at last take a picture of it assembled. 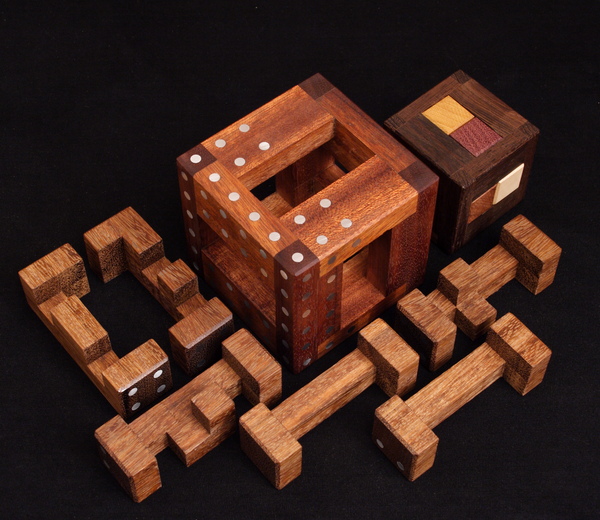 Thanks for sharing those photos!

Ok so that's another couple of puzzles on my list

Pio2001 wrote: ...
The other puzzle of the week-end is going to be wicked ! The name is Congestion. It was created by Goh Pit Khiam, and I heard that Jack Krijnen took part in its conception (not certain about it, Jack, if you are around...).
...

My contribution to the design was minimal. Pit khiam discovered the level 59 puzzle and wondered how to make it a unique solution. I suggested the same appearance as in Stephane's Nickel Box, but Pit Khiam preferred the half white - half black look. Both do the job.
Here's a picture of my homemade Congestion: