Being Maurice Vigouroux's friend, and the photographer in charge for Arteludes, gives me the privilege of having access to all of Maurice's production before it is commercially released

I have thus tried the two next puzzles to come : 18-in-block, and Cage for four Sticks. 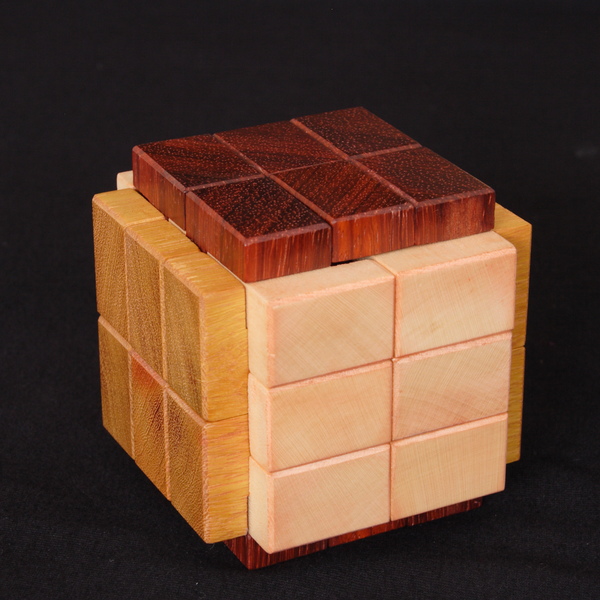 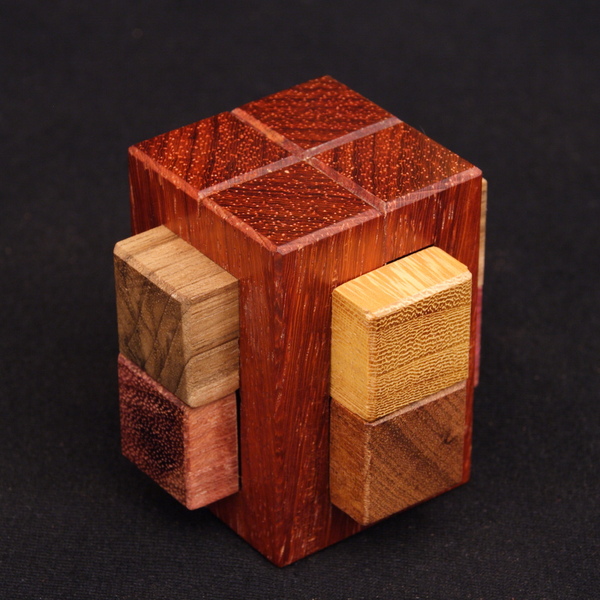 18-in-Block was designed by Alfons Eyckmans. It is a 18-piece burr with rectangular pieces. Maurice liked the new shape, that is nearly cubic, and decided to make it.

It took me about one hour to disassemble it. The two first pieces are not difficult to remove. Then, it takes some time in order to remove the next ones. It is quite easy, compared to most of the 18-piece burrs I know. Definitely easier than Phelan, Cannich, Tiros, Condor's Peeper etc. It is probably the same difficulty level as Coming of Age mkII, by Brian Young.
I had to reassemble it immediately in order to take the pictures, so I used the solution. Anyway, with 65000 assemblies, I don't think that it is possible to find how to reassemble it without help. The rectangular pieces makes it more difficult to learn by heart than Condor's Peeper or Tiros, I think.
The use of a picture showing the position of each piece, and the order of insertion, should allow the puzzlist to reassemble it without the help of a computer.

Maurice used four different woods for this puzzle : wenge, difou, padauk and maple, but only three colour patterns were used. Here are the two other ones : 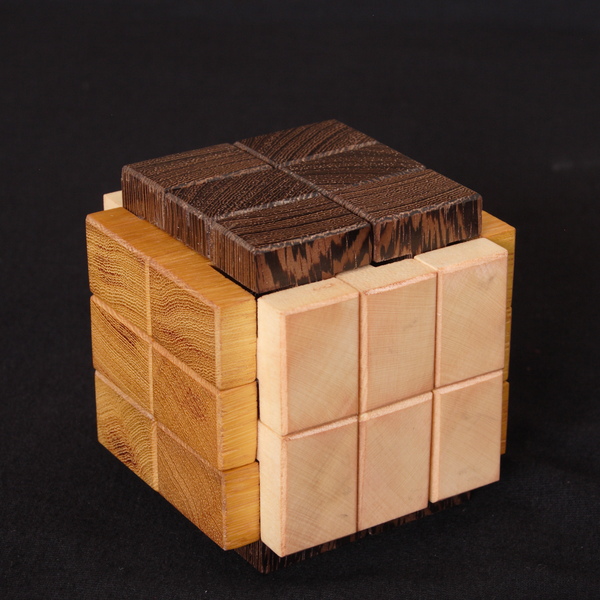 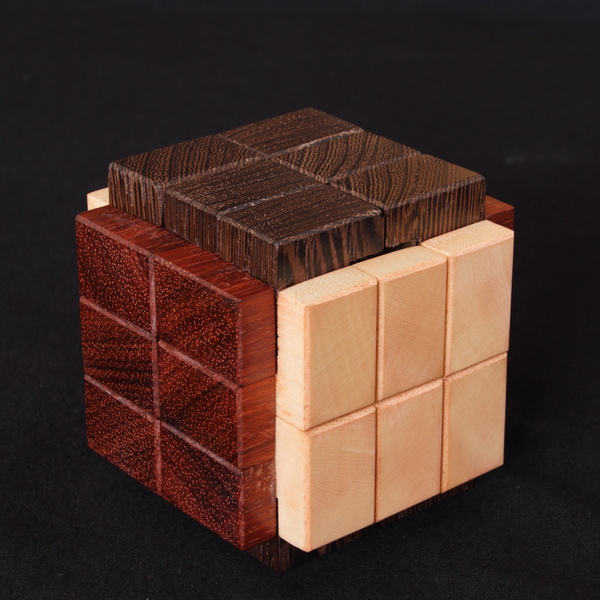 Wenge, difou and maple have the highest contrast, but the padauk used here is outstanding. Its colour is a very deep red, darker than usual for "coral" padauk. It is so loaded with natural dye that the gear used to make the pieces got red-coloured in the process, and that the maple pieces that went next got reddish in turn !
It is the same padauk that was used in Triple Cross, that was the most brightly coloured puzzle ever made by Maurice.
Advice : keep these puzzles stored away from light if you want padauk and difou to keep their bright colour. 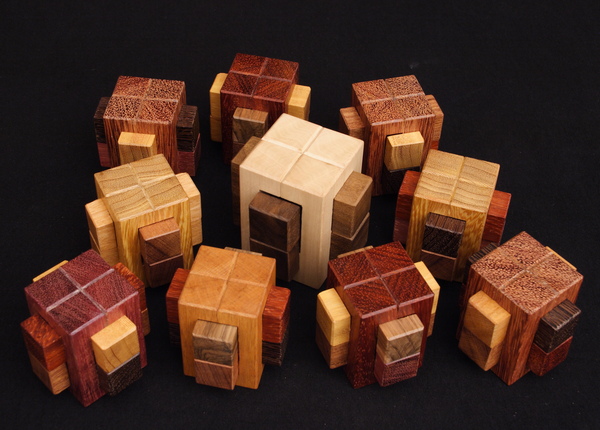 Cage for Four sticks is part of Stéphane Chomine's herd of puzzles. It is the continuation of Four in the Vice, whose shape was kept. The difference is that the cage is solid, while it was made of two free halves in Four in the Vice.
The number of moves is very high for a small cage with standard pieces : 24.6.3. That makes it close to the Château d'If, another design by Stéphane.

It was made in two sizes. The standard size uses 20x20 mm pieces, and a few were made with 25x25 mm pieces. The standard version uses various woods. We can see that some of the puzzles feature Saint-Martin Rouge, a beautiful wood that reminds coconut wood, but in red, rather that brown. The big ones are made of three kind of woods only : walnut, hornbeam, and a kind of very hard bubinga (the same that was used for Four in the Vice special edition).

I didn't keep track of how much time it took me to disassemble the puzzle. Less than one hour, I think. It is quite enjoyable. I feared that it would be difficult to reassemble (it has 1020 assemblies for 1 solution), but the right configuration is in fact a bit easier to remember than with Four in the Vice. It is also easier to remember than Château d'If because it has less pieces, and there are some symmetries.

In order to reassemble the puzzle, I first searched for the right position for each piece. I had a look at the way the symmetrical ones were placed before removing them, and I found the position of the others looking at the possible moves that they could or could not do.
Then, I had to find the whole sequence of moves again in order to insert the pieces in the right order and at the right place. Fortunately, this is no more difficult than the first time, because there is a very simple piece, and it is easy to play the moves with the other pieces around the imaginary space that it would fill if it was in place.

The symmetries are a bit treacherous. While both the cage and the pair of big pieces are symmetric, there are a surprisingly high number of ways to insert them that are not equivalent. That still confuses me when I try to reassemble the puzzle.

In order to change from the Four in the Vice, that I have in hard bubinga, I chose a model in hornbeam and walnut. The difference of behaviour between these woods is very interesting. Hornbeam and walnut are much softer. They are lighter too. The mere feeling of that hard, heavy and high-polished bubinga makes you feel that you really have got something in your hands, and that the hornbeam-and-walnut one is just a toy made in poor materials, in comparison.
However, when you play with the puzzle, it is the opposite. Very hard woods like this bubinga, or bloodwood, for example, are not suited for high level burrs. The pieces never "slide". The fit is always either too tight or too loose, because the wood has zero tolerance. It is rather too loose most of the time, because anyway, with woods hard as that, too tight would mean impossible to move. The softness of hornbeam and walnut, on the other hand, allows for the pieces to smoothly slide against each other. It gives the nice impression that we can "feel the mechanism" working its way, move after move.

The two puzzles (Four in the Vice and Cage for four sticks), in their large version, look gorgeous side to side. I don't think that I'd let them in the showroom, however, because the bubinga that Four in the Vice is made of looks very similar to a certain kind of Padauk, that was used for my Tiros and Lange Wapper 14, and also for the Ultraburr, exotic version. It is in fact impossible to distinguish them. And after some monthes, that padauk, like all padauks, became to loose its colour a bit. I don't want the same to happen to my Four in the Vice, so its going into the black box, besides other puzzles in colorful exotic woods

Here are some more pictures.

The 18-in-Block with one piece removed : 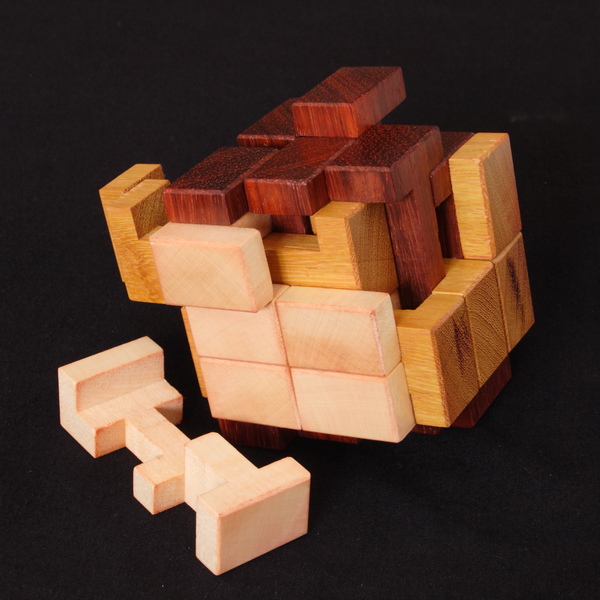 Cage for four Sticks with the cage in Saint Martin rouge : 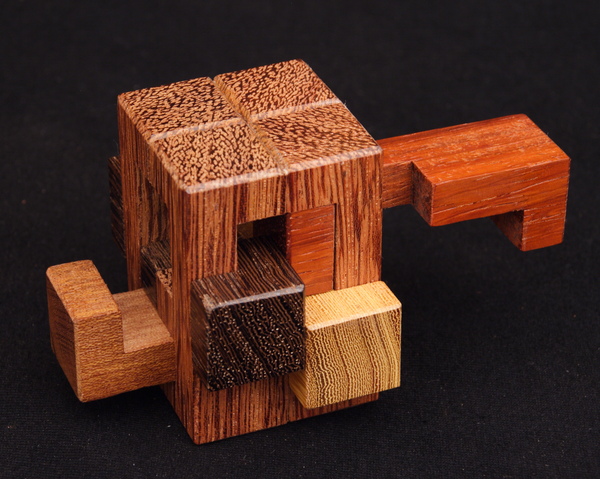 Another Cage for four sticks in niové, with pieces in kotibé, padauk, walnut and wengé. 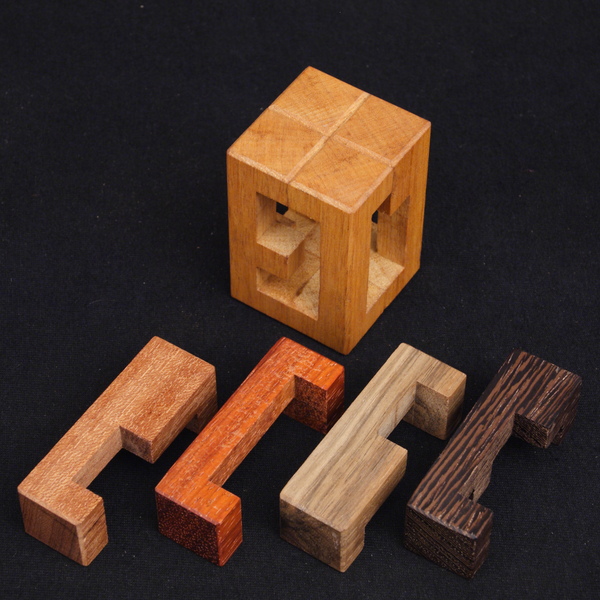 Edit : my mistake ! The white wood of the Cage for four sticks is not maple, but hornbeam