I've been wanting to get one of these beautiful laser-cut puzzle for quite some time. I eventually ordered
Jürgen Reiche's Safe in Puzzle Paradise, and was very happy with it. But with Jean-Claude Constantin publishing more and more great designs, I decided to try something else.
I ordered Steuerrad and Uhrwerk from puzzle-shop.de, and quickly got them. They were wrapped into strong cardboard and arrived in perfect shape. 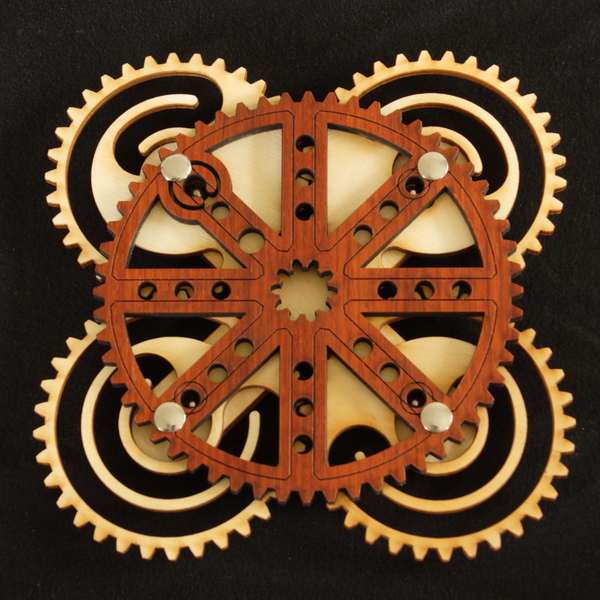 Uhrwerk looks very appealing, with its four gears and their spiralling paths. In each spiral, there is a steel marble held captive. The puzzle comes with no explanation, but one of the marbles is highlighted by an ornament in the wood.A close examination reveals that this marble may come out of the puzzle thanks to a larger hole and a special notch at the other end of the spiral. The goal is thus to bring this marble there.

Unfortunately, I had barely performed several moves when a spiral broke ! The walls between the grooves are indeed incredibly fragile, and if a marble is stuck by chance exactly against the end of a long wall, any movement of the gears instantly breaks it.
Fortunately, the puzzle is easily disassembled thanks to the big bolts that hold it together. The repair was quick and effective. It was once the spiral was repaired that the trouble began !

I took care not to scramble the gears, but I didn't take care about their exact orientation. And I felt stupid, looking at the puzzle with the repaired gear in my hand, wondering in what orienation it should go, so that the puzzle works properly !
I remembered having seen a picture of it in Kevin's blog, so I quickly went there. But, with a sudden suspicion, I went in Puzzle Shop and compared the two pictures. Indeed ! The two pictures showed the puzzle in two incompatible configurations. The gears were not even in the same order ! So I found a third picture, in Puzzle Master... That was yet another incompatible configuration ! In fact, it even shows the puzzle with the layers stacked in a way that can't hold the marble in the spirals...

The puzzle I had to solve was thus harder than planned. I had to analyse the shape of the spirals, understand how they interact with each other, and reconstruct all the sequence this way. Fortunately, the working of this puzzle are straightforward. It is a pure trinary puzzle. I just had the choice in the order of the gears.

Once repaired, I took care never to turn the gears when a marble is stuck at the end of a wall. This is easy to do, as it is their natural movement. All there is to do is to keep an eye on them at any time. The bolts must not be tightened at all, so that the gear are completely free to rotate.

As I said, the solution is straightforward. There is only one path from the beginning to the end. The only difficulty is to remember in which direction you are going, in order not to find yourself at the starting point after having performed tens of movements.
Each spiral has three levels. The first marble must climb the three levels in order to allow the second marble to get one level higher, and then must get back at the bottom to allow it to get on the third level. The second marble behaves the same relative to the third, and the third relative to the fourth.
Thus, 3 x 3 x 3 x 3 = 81 moves are necessary for the fourth marble to reach the end of its spiral, and only then can the first one reach the exit.

In spite of its simplicity, it is really enjoyable, for the sheer pleasure of seeing the gears interacting with each other, and the marble running into the grooves. Once familiarized with the right way to handle it without breaking anything, it is a great design ! 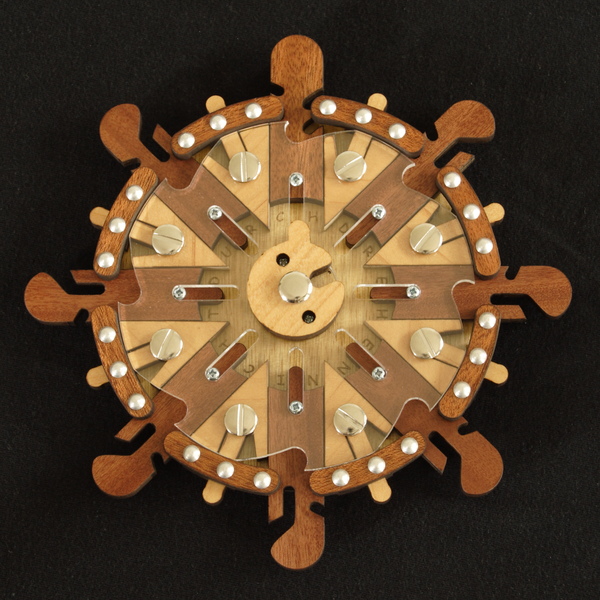 Steuerrad is shown here in the solved state. In the beginning, all the dark tabs are down, and the text is hidden. The goal of the puzzle seems unclear, as no piece looks to be able to get out. But once one or two moves are performed, two letters appear, and it becomes clear that the goal is to reveal the complete hidden message.
This is a binary puzzle with seven locks. Which means that 128 steps are necessary to solve it. But unlike the Uhrwerk, the binary structure is not obvious, as there are locks interacting with tabs, that themselves interact with the central wheel. In fact, one step consists in 4 moves, so we rather may say that 512 moves are necessary to solve the puzzle. But don't worry, it feels shorter than it is.
The difficulty is that the locks, that are the 8 parts with 3 bolts each, interact in two different ways with two tabs at a time (what I call "tabs" are the notched parts with the small screws). Therefore the progression is not straightforward, and it is very easy to forget what you are doing, and to go back to the beginning. In this aspect, it is very similar to Bill Cutler's Binary Burr, where the pieces also interact in a complicated way.
In fact, there is a second difficulty that made me loose my way several times until I eventually identify it : the puzzle is not completely binary, as the second notch in the back of the tabs may be misused, leading you away from the binary path into a dead end. I didn't realize it and blindly performed any action that seemed possible, thinking that there was only one path from start to finish. I first thought that I was doing something wrong with the central wheel until I realized that the tabs could sometimes be locked in an unuseful position.
Eventually, I found two rules that must be respected during every move, and that allow to go from start to finish without any mistake.

Steuerrad is a harder puzzle than Uhrwerk. It does not move as smoothly, the locks being somtimes a bit stiff. But on the other hand, it requires a bit of attention and reflexion. Both are very beautiful and are innovative implementations of an old principle. Jean-Claude Constantin really took advantage of the possibilities offered by laser cutters. The smell of burned wood is weak compared to the Safe puzzle, and is not a problem at all.

By the way, if you need to reassemble an Uhrwerk puzzle, the picture I posted above is nearly correct. The puzzle works properly in this configuration, but it is better to have the upper left wheel rotated one more tooth counter-clockwise, so that the notch (that is hidden in the picture) doesn't come too close to the exit during the sequence.
Top
Post Reply
2 posts • Page 1 of 1