Another post about my recent acquisitions from Vinco. This time, the puzzles have nothing in common.

In december of 2013, Vinco published his first new realisations since one year. Among beautiful and great puzzles, there were some less expensive ones that looked fun to play with. I talked about the Cube Plus in another post. Here is the Shameful Congressional Gridlock. 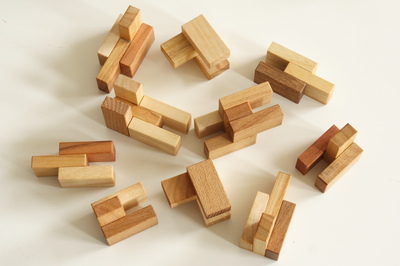 It consists in a set of 10 pieces. Each piece has a male and a female extremity, and the pieces can have 4 different shapes. The goal is to pack them into any of the shapes proposed in the manual.
It benefits from the excellent manufacturing quality of Vinco, and from the softness of czech woods : the pieces fit together perfectly.
It is moderately difficult, and propose 12 different challenges. However, it found it less interesting than a Cube Plus or a Fake 3x3x3. Maybe because it is essentially a 2D puzzle. The third dimention is never used. 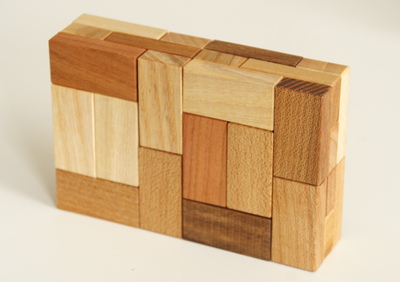 For the readers whose native language is not english and who wonder about the name of the puzzle, just find an english dictionnary and look under the entry "congress".

It was only after having filled a first order that I noticed that there was a new category in the website called "Other puzzles for sale". It says Here you can find some cheaper puzzles. From it, I decided to buy a No Name. 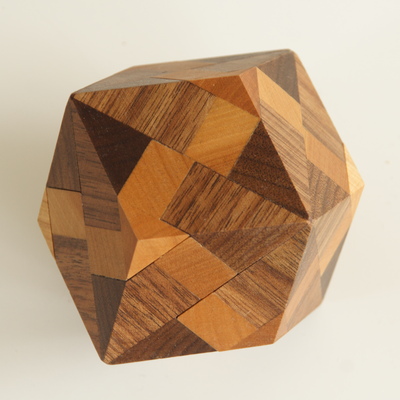 I chose it because A- I found it beautiful; B- It is an interlocking puzzle that I didn't have yet; C- It has the shape of a rhombic dodecahedron... and I'm very interested in all puzzles related with this shape, from the Scorpius to the 6-piece diagonal star through the Hectix.

It features four identical pieces, but this is not the usual coordinate motion mechanism. It is more like the four-piece interlocking of 2011 (Rhomby, Icosahedron, Polyhedron olval etc). The opening is very well hidden. On the picture, you can see where the different pieces meet, but I can tell you that it doesn't help at all !
There is however just one move to perform to open it, and it is a matter of minutes until it is eventually found. 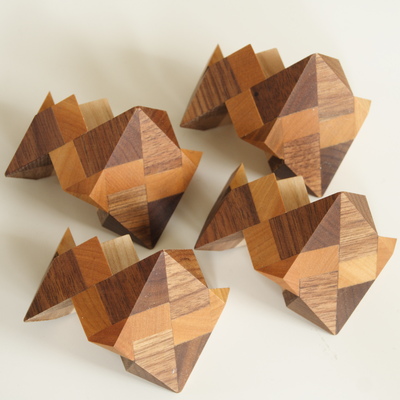 Numbers are written inside the pieces. It is useful because as the pieces are identical, there are several different way of arranging them in order to rebuild the puzzle. The order given by the numbers is the one used when the puzzle was sanded and polished. Following it allows the pieces to join perfectly, without any irregularity on the surface of the final shape.

Last, the most interesting puzzle in this set in my opinion : the Xcruci8. 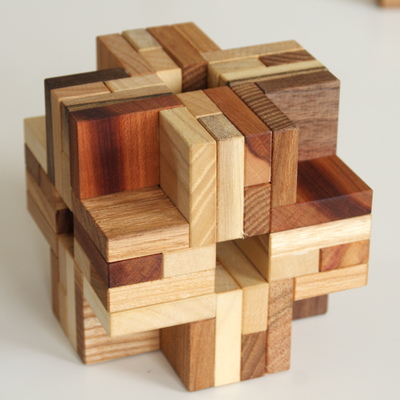 It is a very beautiful puzzle made of 8 different pieces. Each piece stands in the corner of a cube, as the 8 cubes of a 2x2x2 Rubik's cube, if you see what I mean. Two adjacent pieces must have matching sides in order to fit together, and there can be 8 different kid of "sides". 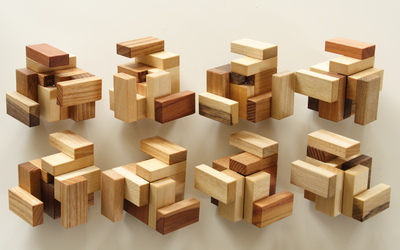 As you can guess, putting together a handful of pieces is not difficult. It is only when you are close to the end that the pieces that are left are never the ones that you need to complete the puzzle !
I had already seen a puzzle based on a similar idea. It was made of 8 cubes, and each cube had a triangle glued on three sides. The goal was to make a bigger 2x2x2 cube with matching triangles between each pair.

But here, there are 8 possible shapes on each side, instead of 4, and they are more difficult to visualize. The two intermediate layers must be carefully observed in order to know if a pair of piece can be joined or not... because, on top of that, the pieces cannot just be pushed against each other, they interlock. Not a problem with the three first pieces, but once you need to insert a piece that has more than one side in common with the pieces already in place, you often have to remove an existing piece first. There are even assemblies that are impossible, like in high level burrs. Fortunately, no more than two moves are required to remove any piece from the puzzle.

Vinco rates it more difficult than the Cube Plus, but I solved it faster. In fact, it is difficult to compare the difficulty level of these two puzzles. If we try a systematic approach, maybe the Xcruci8 is harder than the Cube Plus, but what makes this puzzle very interesting is that you don't necessarily have to perform an exhaustive enumeration in order to solve it. I won't tell too much in order not to spoil the pleasure to look for your own method of resolution.

Let's say that it requires a more elaborate reflexion than just trying the various pieces at random, but that once you get into it, the difficulty level becomes just right. I have updated my list of difficulty ratings, and for the Xcruci8, I wrote difficulty = 3/3 (for expert puzzlists); duration = 45 minutes.

A very good puzzle in my opinion. And the manufacturing quality is the top.
It is even possible to create artwork with the pieces 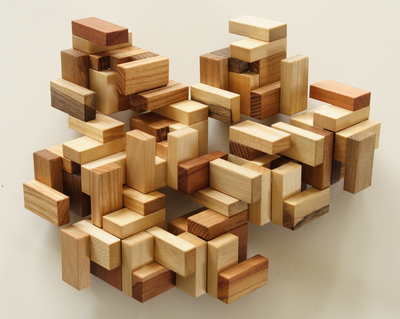