I review these two puzzles together because, though their structure is different, they feel very similar. 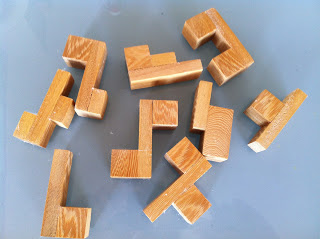 I found the design of Erhan's Fake 3x3x3 Cube browsing Ishino's website, looking for interesting puzzles. I added it to my shortlist, and showed it to Jean-Baptiste Jacquin and Maurice Vigouroux. Jean-Baptiste decided that we should make some for ourselves when we visit Maurice's workshop.

It looks like a Soma Cube, except that instead of dividing the cube into 3x3x3 = 27 smaller cubes, some subdivisions of these small cubes in half are also present. It looks deceiptively easy, but in fact, it is a terribly difficult puzzle. It took me about 5 hours to solve.
Erhan Çubukcuoglu, the designer, says that most people manage to get 7 pieces together. Few can get 8 pieces together, and getting all 9 pieces into a cube is a real challenge. 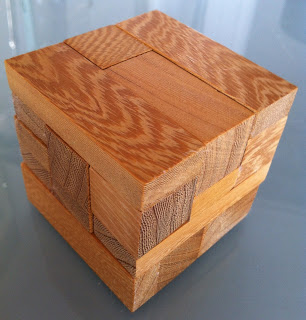 However, it is not really boring. First, the pieces look cool, and after some time, we get more and more familiar with them, which progressively allows new ideas to surface. 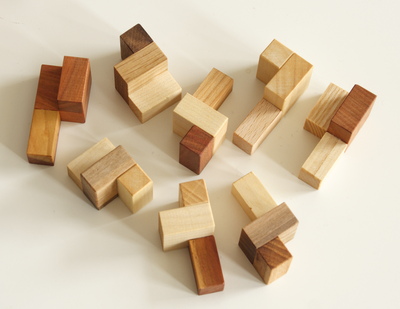 The second puzzle is Vinco's Cube Plus. I had noticed it in Vinco's last update, since I was looking for something that could keep me busy for a while. I was happy to get it in my order and quickly started to play with it.
It happens that I had made two different orders, because one of them had to be dispatched for christmas. In the second order, I had the surprise to see a second Cube Plus ! I checked my order forms in order to verify that I hadn't made any mistake, and, to my surprise again, I saw that I had never ordered it !Neither in the first order, nor in the second one.

In fact, Vinco had included it into both packages as a gift, given the amount of puzzles that I had ordered. I was delighted to find that. And I must say that one of them is made of pretty colorful woods, as I like. I just thought that I had ordered it the first time, while it was not the case

Although it has only 8 pieces, I soon realized that it was no less difficult than Erhan's Fake 3x3x3 ! It took me hours to pack the Cube Plus into a cube. 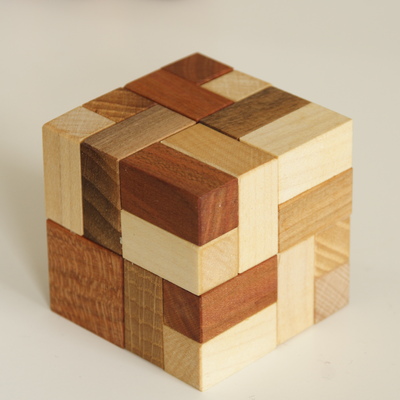 It is funny how these two puzzles have behaved while I was solving them. It is only after having played a lot with them that some loose constraints began to appear. Some logic relationships or constructions slowly became recurring. However, following them didn't lead me anywhere.
It is only after having tried twice all the combinations that looked most logical and symmetric, that I began to introduce a bit of disorder in them. And then, the solution - well, one of the 8 possible solutions for the Cube Plus- came out !

If you look for an occupation while you are waiting for a plane in an airport, or if you have a rainy week-end to fill, or if, like me, you just love to be addicted to a puzzle that resists your skills for a fair amount of time, these are what you need !
Top
Post Reply
1 post • Page 1 of 1